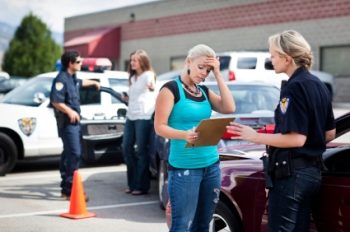 The things you should do in the few moments after a car crash can determine who is at fault for the accident and how much of an effect the event has on your insurance rates.

According to a 2012 survey by the National Association of Insurance Commissioners (NAIC), many people do not know what information they should and shouldn’t share after an accident. Not sharing enough information could cost you if your insurance company ends up paying for the damage, says Michael Silverman, president of the Gloron Agency, Inc., an insurance agency based in NYC. This could be because your insurer had no way of contacting the other party involved in the crash.

On the other hand, providing too much information puts you at risk for identity theft.

5 big mistakes to avoid after a car crash

Here are the biggest mistakes you need to avoid:

1. Making any statement about the accident to the other party.

The biggest mistake people make after a car accident is to make a statement about the accident (such as admitting it was your fault), says Frank Scafidi, spokesman for the National Insurance Crime Bureau (NICB). “This is particularly bad if there were no witnesses. You could be shaken up and say things aren’t wise and the other driver could use them against you,” Scafidi says.

Just exchange information and leave it at that. Only make statements to your insurance company and the police, if they’re involved.

The information you’re required to exchange varies from state to state and may include:

2. Giving the other driver too much information.

As a general rule, don’t provide the other driver with information you are not required by law to provide, such as your license and home address. One out of six people surveyed in the NAIC report would allow the other driver to take a photo of their license as a quick way to exchange information. This puts the driver at risk of identity theft, as a driver’s license number is often used to verify identity over the phone. “New software these days can make flawless copies of documents (which can be used to steal identity), so it’s best not to make it easy for these folks,” Scafidi says.

However in some states, such as California, you’re required to provide your driver’s license information. In others (North Carolina and Missouri, for example), you aren’t.

Call your state insurance department to find out the laws in your state.

3. Deciding not to call the police.

Nearly 20 percent of people believe it’s only necessary to call the police after an accident if injuries were involved, according to the NAIC. Failing to call the police can have a number of repercussions, including delaying the insurance process, says Rose Marshburn, a personal lines specialist with SIA Group, an insurance agency in North Carolina.

“If you don’t contact the proper authorities once you’ve had an accident and someone is hurt in your vehicle or the other party, you could suffer the consequences.” For example, your insurance company can cancel your policy, or decide not to renew your policy. They can even deny the claim if the proper procedures aren’t followed.

4. Not getting the other driver’s information.

Often, drivers wrongly assume that the police will record the names and contact information of the other drive and any witnesses, so drivers don’t do it themselves, says Thomas Simeone, a personal injury lawyer with Simeone & Miller, LLP, a Washington, D.C. law firm.

Without the other person’s insurance and contact information, any claims you make would be with your own insurer, Silverman says. An at-fault accident could raise your insurance rates by five to 10 percent, depending on many factors including your driving record.

On the other hand, if you’re hit by someone and their policy covers the claim, their rates would go up, not yours, Silverman says.

If you file the claim with your insurer, you pay the deductible (typically between $250 and $1,000).  “If you’re lucky, and they eventually track down the other party, you’ll get back your deductible,” Silverman says.

5. Failing to photograph the accident scene.

Taking photos of the accident scene can back up your claim to your insurer. “A picture really is worth a thousand words,” Silverman says. Nowadays it’s easy to use a camera phone to photograph and record the scene. Take pictures of any skid marks, debris, broken glass, etc. Take photos that show the routes each car traveled, (walk the route and aim the camera in that direction) where you were and the position of the cars, if possible.

To make the process easier, download an app such as Auto Accident App, which provides live assistance and a step-by-step guide to getting the necessary information to file a claim after an accident.

Bad economy might be costing teens their driver's licenses
Tuning up your coverage: Insurance for musical instruments
Auto Insurance Basics That Save
Scary home insurance claims to avoid around Halloween