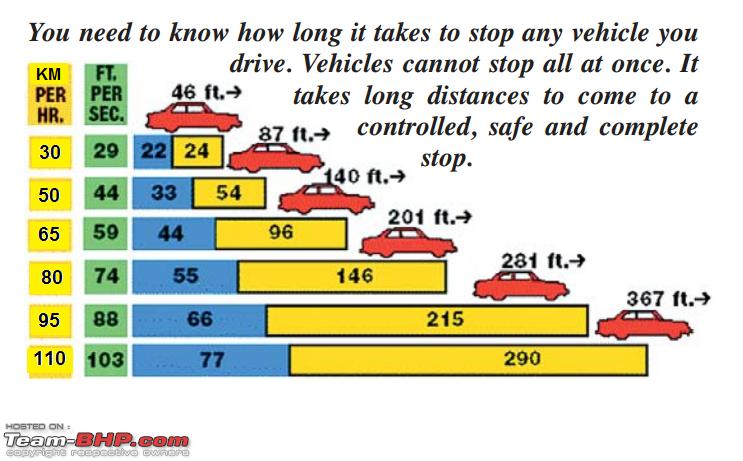 If you want to have a safe stopping distance, you must: Next time you’re out driving, count to three. It’s not a technique for controlling your temper, although that’s also a good thing to do when you’re behind the wheel. Counting to three can help you maintain a safe following distance between your vehicle and the one ahead, giving you time to brake safely if you have to stop suddenly.

Here’s how the three-second rule works, according to Edmunds.com: When the vehicle ahead of you passes a street light, a road sign or some other landmark, start counting. It should take your vehicle at least three seconds to reach that landmark. If it takes less time, you’re following too closely and you should back off. If you’re driving in bad weather or at night, you should allow even more distance between you and the vehicle ahead.

Some drivers think that quick reflexes will help them avoid collisions caused by following too closely. But they usually underestimate the time it takes to perceive a problem and react. Drive and Stay Alive (DSA), a nonprofit group that collects and shares information about safe driving, says that most drivers take between two-thirds of a second and a second to apply the brakes. Inexperienced or distracted drivers may need even more time. How far drivers travel during that reaction time depends on the speed of the car. The faster a vehicle is moving, the more distance it will cover as it’s coming to a stop.

In addition to the speed of the car, driver reaction time plays a major role. Drivers traveling at 60 mph who take just half a second to react will be able to stop their cars 88 feet sooner than drivers who take a second and a half to react, according to the National Highway Traffic Safety Administration (NHTSA). That’s why it’s so important to pay attention to the road when you’re driving.

Antilock braking systems (ABS) and properly inflated tires with good treads can give drivers a better chance to brake quickly, according to NHTSA. But even the best equipment and the fastest reaction times can’t overcome the laws of physics — it simply takes a certain amount of space to stop safely. So get in the habit of counting to three to give yourself plenty of time to brake — and avoid auto insurance claims.

Safety Measures Lower Auto Insurance Quotes
How will health insurance marketplaces address women’s health care?
Maryland Insurance
What type of coverage would an insured need that is leasing tractors/trailers to Enterprise, but is ...