As spring and summer roll in, hailstorms aren’t far behind. Hail rarely is life-threatening, but it can cause major damage to your home or car. 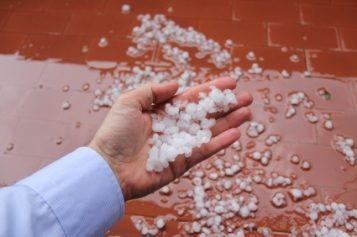 Annually, hail causes more than $1 billion in damages to crops and property in the United States, according to the National Oceanic and Atmospheric Association (NOAA).

State Farm recently released a list of the top 10 states with hail-related insurance claims. State Farm and its policyholders wracked up $3.9 billion in damages associated with wind and hail damage in 2012.

The states with the most claims were:

Hail damage is especially likely in certain areas of the country, such as in the Great Plains and Midwest states, says State Farm spokeswoman Michal Brower.

States most at risk

But hail storms themselves are most common in certain states in the so-called “hail belt” (also known as “hail alley”), which includes the states of Colorado, Kansas, Missouri and Wyoming, according to the Insurance Information Institute (III).

In states like Colorado, hail is “our most common catastrophe,” says Carole Walker, executive director of the Rocky Mountain Insurance Information Association (RMIIA).

From 2009 through 2011, hail caused $3 billion in insured damages in Colorado, according to the RMIIA.

In June 2012, hail hammered parts of Colorado, causing $321 million in damages. That was almost as expensive as the destruction associated with the Waldo Canyon fire, Walker says.

Although hail damage is less expensive per claim than fire losses, hail damage is more widespread, she says.  A large hailstone falling from the sky can reach speeds of 100 mph before it makes impact.

“It can batter thousands of roofs, cars and homes in a short amount of time,” Walker says.

Tanya Brown, a research engineer with the Insurance Institute for Business and Home Safety, says her organization examined data between 2000 and 2009 that underscores the danger in areas outside the “hail belt,” such as along the nation’s West Coast.

“Every state west of the Rocky Mountains had at least one severe hail event with hailstones of 1 inch in diameter or larger,” she says, adding that 1 inch is the threshold above which damage tends to occur.

The high cost of hail damage

Hail also can damage your wallet.

The best way to prevent hail damage is to make sure your home’s roof is impact-resistant and that your car is properly garaged.

Today’s roofing materials are rated and divided into four classes. Each class is defined by how well the products withstand hail stones of various sizes in diameter:

“The cost of the materials to upgrade from a standard asphalt shingle to a Class 4 impact-resistant asphalt shingle is approximately 75 percent to 100 percent higher,” Brown says.

Some insurers offer discounts to homeowners who install impact-resistant roofs.

“These credits can lead to savings for years to come, and can eventually offset the higher upfront costs associated with impact-resistant products,” Brown says.

To protect your car, make sure it is garaged or parked under a carport.

Some people drop comprehensive coverage on their cars when the vehicle reaches a certain age. However, this can be risky, as it can leave you without coverage for hail damage if a storm strikes when your car isn’t in a garage.

“When you are stranded on the highway during rush hour, there is nowhere to hide from Mother Nature,” Walker says.

If you need to make a hail damage claim, the III suggests you first secure your property or car so that no further damage occurs.

Cover any spots where a window has been broken in your home or car. Make sure there are no uncovered holes in your roof where rainwater can seep in.

Call your insurance agent as soon as possible to make your claim. Provide the agent with a description of the damage. Take photos of the damage so you have evidence for your claim.

Also, remember to save any receipts for materials you bought when securing your car or property. These may be reimbursed by your insurer, depending on your policy limits and the final claim settlement, Walker says.

Your insurer will send an adjuster to look at the damage. Once the adjuster has surveyed the damage, you will need to find a reputable contractor to make the repairs on your roof. Or, if your car has been damaged, and auto body shop will fix the damage.

New baby can bring bundle of insurance questions
Insurance for Cars: It's Your Choice
How to protect your home from wildfires
It's Official - Men Are Terrible Drivers